Yeah trailer was meh. Have to wait for trailer #2 if they do another.

Trailer looks okay. You can tell it's hardly going to feature Seagal and it's low budget, but oh well, we all expected this. I listened a few times and it sounds like Seagal said "mother" instead of "another" when he said "don't say a 'mother' word to me" haha. Hope this new film he is doing will be AWESOME (haha) which has forced him to cancel his UK tour shows. I'm sure it'll just be another few days work for him but it obviously paid more money.

Staff member
Trailer looked not too bad, was expecting it to look worse.

I think the trailer looks good. Seagal's character looks interesting and I like Johnny Messner as an actor so I'm fine with home being the lead.

Staff member
I tried to contact James Cullen Bressack. Maybe he could talk about the shooting or do an interview for our site, like many directors did.

He got my message and read it, but still no reply.

I pre-ordered the digital HD. Will probably buy the Blu-ray too!!
Last edited by a moderator: Nov 24, 2019

Idk about Beyond the Law. Why all the clips are talking? Let's see the ACTION!!!

Nice to see a clip from the movie. It wont be anything above average, I know that, but I'll watch it.

I like what I see so far. It's nice to see Seagal in a crime thriller rather than another CIA type flick.

jackcole145 said:
I like what I see so far. It's nice to see Seagal in a crime thriller rather than another CIA type flick.
Click to expand...

Exclusive clip of DMX from Beyond the Law

That red band trailer looks okay. I doubt more than 10 people will go see this in the selected theatres it's playing at though. I liked Seagal's bit at the end where he said "you wanna be a gangster" or something and then did a few quick shots. Hope he makes another movie soon, looks like a bit of effort was put in here, so imagine if he put in more effort and the film had a better story and bigger budget?

Straight away (to those who don't already know) Steven Seagal is not headlining this movie. As it stands, he's in the movie long enough to warrant an appearence on the poster. Quibbles aside, he put's in a fairly credible performance (a little like Pauly Trunks from 'Gutshot Straight'....but a bit more, pardon the pun, weightier) Contrary to other reviews, he doesn't spend the entire movie sat down (just a fair percentage of it)
Despite his (all too brief) fight at the end, he seems to channeling his 'Mr Alexander' persona (from 'Force Of Execution') here

I think approaching this movie with no misconceptions (or even, low-expectations) you'll be pleasantly surprised that there's a decent little crime thriller, lurking underneath.

Messner is his usual, gruff self (looking permanently hungover or pissed off) as the crooked ex-cop looking to find out who killed his (long estranged) son.

DMX (never the worlds greatest thespian to begin with) plays it fairly low-key (and all the better for it) as an active cop (but no less corrupt) He shares a phone call with Seagal's character (once) in the movie....but it's more than obvious (given the rumours on 'Exit Wounds') that they were never on set with each other, this time around?

The three central characters all share equal(ish) screentime (just rarely together) and they're all corrupt anyhow....so there's no distinguishable 'good-guy' to root for here (which felt like a nice change of pace for Seagal) The viewers sympathies should probably lie with Messner (as he's the protaganist that's seeking vengeance) but whether or not it was the writers choice (or Seagals interference/ego demanded otherwise) it doesn't end too well for any of the characters involved

Although low-budget, the cinematography is good (if not great)
A nice clear soundtrack (music and vocals)
No voice (or stunt) doubles for Seagal and enough 'incident' to keep the viewer interested throughout (i.e, a lean plot, with little filler)

Zack Ward (whom I've followed since Uwe Boll's 'POSTAL') is suitably smarmy/cocky as Seagal's wannabe-gangster son. Seagal spends the first half of the movie, warning his son away from crime (and being generally disappointed in his offspring) but as soon as Seagal finds out the same son is cutting side-deals and trying to take over his empire....he puts down his cigars and whiskey and rights a few of his own wrongs.

All in all, Beyond The Law is a slightly better movie for Seagal (career-wise) it's a shame it's not a better 'Seagal-Movie' (in terms of his screentime) It's great to see him become (gasp!) a decent supporting 'character actor' this late in his career....but only 5-10 years previously, he'd have likely played the role that Messner got?

Whilst I'm glad Steven put in a decent performance here....I'd wish he'd take centre stage again (whilst he's still agile enough?) Given the fact that none of the cast looked to be on set for more than a few days each....Seagal should (like Bruce Willis or Nicolas Cage) at very least, be putting out more 'little' movies like this per year than he is at the moment.

If you like some of the medium-end DTV fare (like Bruce Willis or Luke Goss are putting out) but with a more 'crime thriller' leaning....then I'd highly recommend 'Beyond The Law'.....if you're expecting 'Under Siege III'.....look elsewhere

I watched it today and felt it was watchable, for sure. Definitely better than some of the stuff he's put out this last ten years. I just think films like this... if they had a little more money, had a little more effort put in by all parties, then they would definitely find a wider audience and be appreciated. It's good to hear Seagal talking himself all the time, but I just wish he would inject a little passion from often because when he does you can understand him clearly and he doesn't come across as drugged up or drunk. I hope he can film a few things like this next year, otherwise it's going to be an empty year sadly. I'd give it 5.5 / 10. 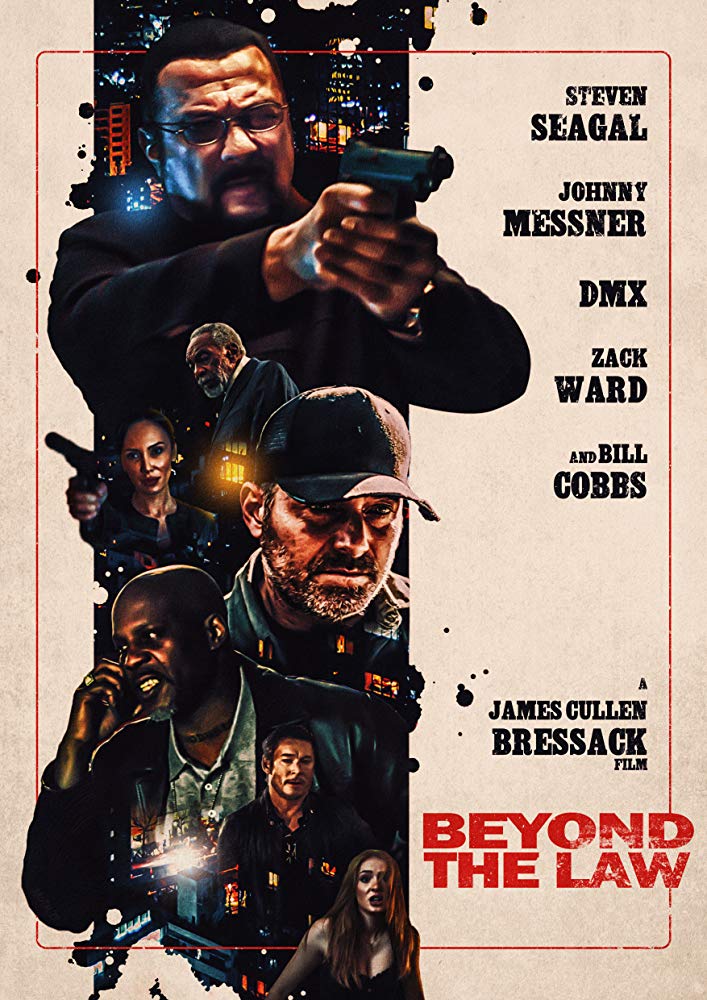