Movies Soldier of the Snowline/Genghis Khan


According to Beijing Times, Steven Seagal has arrived in the city for his GENGHIS KHAN. Besides casting several martial-art actors, Seagal was looking for a tall and pretty girl who can dance. He said he would personally teach her martial art. More than 20 girl models represented by Pierre Cardin has been interviewed by Seagal last night at a restaurant. Seagal said "the script is done and the finance is secured - about 60 million dollars (US). But I can't tell you the source of the money. You have wait until the news conference next time. It hasn't been decided yet who would be the partner of GENGHIS KHAN, but I can assure you the shooting will start in March or April next year." 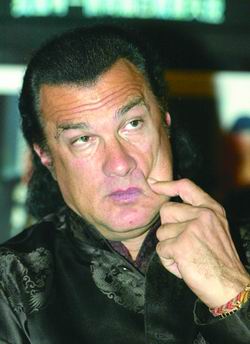 I tried but this news on the News section, but I failed...
Click to expand...

He looks nice !!! Thank you very much for this great information !!
Next year !! huh ?? May be finished "Belly of the Beast" and he began Ghengis Khaan..
We will wait and we will see !!

Cool! That's great news...Thanks for the nice, recent photo too, Craig...
He doesn't look to happy about having his photo taken, though...
I just can't wait for this film to come out...It will be good one for him I think...

Just looking at steven again, and don't try to stop me!

Staff member
We will not stop you Lotus !! Gohead !!

but he is wonderful in this photo !! natural and sympathetic!!
He is beautifullllllllllllll !!

Hey cman,thanks for the news!

Suzi:We gotta wait another year for this film to be made

He has to make Belly Of The Beast,The Yakuza & The Rescue first

And I can't wait to watch them all!!!Hopefully Out For A Kill will come out soon!

Btw-I'm pretty sure The Rescue has been changed to 'Out Of Reach.'

I believe he will be successful

But I am sure the most beautiful and gorgeous Ghengis khann of the movies will be Mr. Seagal !!

Yes, good things will happen for him, I am always wishing this for him of course...Lots of new movies coming out, good and really interesting, like "The Yakuza" and "Genghis Khan" I am sooo excited! He will always be the brightest star in hollywood to me...

Thanks for letting us know about the name change regarding "The Rescue/Out for a kill," Leon...Is it coming out soon? I don't read every post here, so I don't know...
J

I think "Out For A Kill" will be coming out in either June or July.

What the heck is 'monkey peaches?'

Originally posted by Lotussan
What the heck is 'monkey peaches?'

Be damned if I know!
Perhaps it's a website?!
J

The Rescue,recently changed to Out Of Reach,will be coming out through Franchise/Warner Bros.(same for The Yakuza).I think a few members here thought that Out Of Reach was perhaps a title change for Out For A Kill,but that film is through Nu Image/Millenium/Lumminosty.

I believe Monkey Peaches is a magazine.

Thanks Justice for the update.
J