Stories about Seagal (from director's , co-stars....)

Seagal1969 said:
Stallone´s "The Specialist" and Snipes "Drop Zone" were not huge hits.

His love for the environment and his increasing weight destroyed his career. He was not able to keep his weight. It started with "Under Siege 2".
Click to expand...

I think it was his ego and he lost his passion for filmmaking. Just check out the interview with the director of Fire Down Below.

lee nicholson said:
I think he'd still be with them now?
He should have followed up Under Siege with either 'Blood On The Moon' (which still could have incorperated 'aikido' into it's plot of man vs modern day pirates, whilst still offering it's star a slight change of pace) or 'The Specialist' or 'Drop Zone' (both of which he was linked to at the time)
Click to expand...

Wasn't 'Blood On the Moon' supposed to be about a mercenary helping monks flee to Tibet to escape the
Chinese who were destroying their Temples and massacring the monks?
Took place in the 1800's I think...

J.Lucas said:
Wasn't 'Blood On the Moon' supposed to be about a mercenary helping monks flee to Tibet to escape the
Chinese who were destroying their Temples and massacring the monks?
Took place in the 1800's I think...
Click to expand...

I thought it was more of a modern action movie (similar to the 1988 Gary Busey movie 'Act Of Piracy') that's if the promo poster is anything to go by? 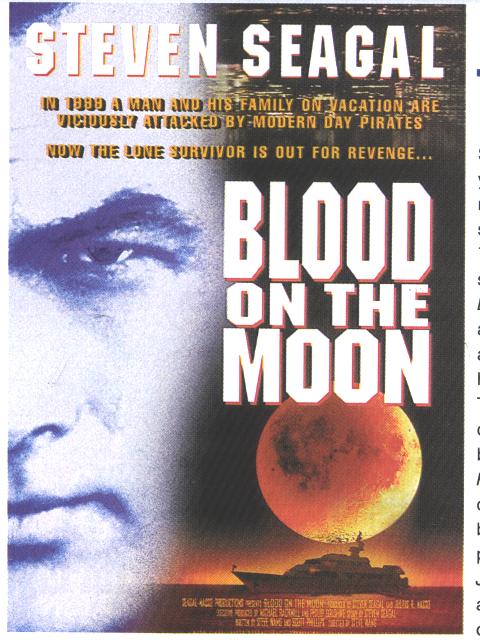 However, rerwrites (especially with Seagal) are common....can anyone remember when 'Shadow Man' was originally intended as WWII drama about a doctor (entitled 'Shadows Of The Sun', I think?)

Staff member
I really would like to hear something of or do an interview with director Jeff King, who made Driven To Kill and Kill Switch with Seagal. I am especially interested in what he has to say about Kill Switch, because that was shot as a totally different movie. Avi Lerner took that out of his (and Stevens) hands en butchered it.

I will try to find a way to contact him and ask him if he is willing to do it.

DiDa said:
I think it was his ego and he lost his passion for filmmaking. Just check out the interview with the director of Fire Down Below.
Click to expand...

I´ve watched it a couple of days ago when it was posted.

Staff member
Does someone know how or where to contact Jeff King? I can't find anything (only his instagram and twitter but there is no possibility to send him a private message on both platforms).

Wow that would have been a weird film for him to do.

Everything is possible. Believe it or not but he was also considered for the original "Batman" movie.

Staff member
Interview with director Stephen Hopkins where he talks about Predator 2 and Steven Seagal. Seagal wanted to be in Predator 2

I prefer 'PREDATOR 2' over the original....But it would have been great to see Seagal in this (given that this was in the same year and with the same studio that gave us 'MARKED FOR DEATH'.....The fight scenes would have been insane!)
The predator wouldn't have stood a chance?

lee nicholson said:
I prefer 'PREDATOR 2' over the original....But it would have been great to see Seagal in this (given that this was in the same year and with the same studio that gave us 'MARKED FOR DEATH'.....The fight scenes would have been insane!)
The predator wouldn't have stood a chance?

Yes liked Predator 2, didn't understand why so many people didn't. I remember a version i saw recorded from Sky TV years ago not long after release with lots more gore and violence than the one that is available today.

George Karlukovski who was the stuntman/choreographer of Submerged speaks out against Seagal.
I'm typing this up right now from the Martial Arts Illustrated July 2007 edition that I'm reading right now.

Q: You've worked with numerous action stars-getting hold of Steven Seagal, Vinnie Jones and Gary Daniels for one movie must have been some feat.
'Honestly it was a damn headache, the problem is Gary is a darling, a really nice dedicated guy who shows up on time, is talented and will give you everything. Vinnie thinks he is God's gift to fighting and Steven is well Steven.....scripts got changed at the last minute, there's a scene where Vinnie Jones dukes it out with Seagal, punching him about, bruising him and grazing him, im working on it with Vinnie and Seagal's stunt double Dian Hristov, then Seagal steps in and says 'This won't work, the audience won't beleive he[Jones] could beat me up like that'..I ask him what he means he says 'Exactly that it won't work, the hero can't get battered by someone who doesn't know the martial arts I do'...at this point Vinnie tries to calm the storm in his Brit accent joking 'Come on mate, I would give you a run for your money' and Seagal looks at him like death and says 'No you wouldn't'..then Jones turns away disgusted and mutters *beep* under his breath.

The director steps in but the fuse has been lit...next thing we know the whole scene has been written out. Vinnie is gossiping with his other Brit co stars how he 'can take Seagal' and everything goes haywire, Vinnie is doing his scenes and Steven is muttering and murmuring so much the boom mike can't pick up what he's saying-at one point I was really afraid they would get it on for real. It would have made for a better film I tell you

Q: Gary Daniels though was a different person to deal with?
'Yeah poor Gary was the lead villian until Seagal wrote him out, then at least he was promised a good fight scene with Seagal but seagal was against that too, Gary was saying 'Let me try this kick and this and this' and Steven says 'NO that wouldn't work, my character would kick your a*s and that's that'. Gary was unhappy and so was I: i mean how can i choreograph a scene that ends with Gary being beaten up in twenty seconds? It was hard and Gary held his pride I'll give him that.

Q: I've heard stories Seagal hits his stuntmen and beats them up?
'That's sort of true, him and Dian have a good relationship, but with me he was quite obstinate, at one point I had a big fellow to do this fight scene with him-a Russian wrestler-and Steven says 'This is not going to happen, the fight would be too one sided and it'll look fake'..only reason he said that was because the Wrestler was managing to hurt Seagal but gripping him too tight. So Seagal brought in one of his bodyguards-this big black guy and they did the scene themselves'
F

Submerged has signs of issues written all over it when you watch it.

Hickox is actually in it in an early scene, he gets stabbed in the back while he's on the radio.

Submerged I can actually watch in spite of its horrid model planes, horrendous dubbing and ridiculously over-saturated colours in the later scenes.

I worked on the film and earned two SAG vouchers in the process, so I can't dog it too much. I also got a close up. I was the grayish, blonded hair convict, who has a big head, rather tall, and goes bump, bump, bump, when Segal was lead to his cell. The film was very terrible, but I was very well treated by the crew and the food on the set was awesome. I also met some really nice people as well. From a production side, it was a great shoot, but from a viewers side, it is not a very good movie.

I heard that seagal was very lazy and difficult while filming is that true?

He seemed very nice to me. He got a little impatient with the crew, if they were not ready for him, when he and his possie came back to the set. I actually liked him. I was pretty close to him in some scene and when I came close to him, he smiled and acknowledged me. I thought it was interest to watch him work out the fight scene in the prison court yard, so nobody got hurt. It was a very good production experience.
F

Looks like it was a more fun experience behind the scenes than it was watching it.

T: In a two year period you collaborated with Steven Seagal on three films. Can you tell us about your working relationship with Seagal?
D: We had a really good working relationship; he and I just respect each other. We haven’t worked together since ‘Urban Justice’, back in 2007. He recently asked me to do one of his films, but I wasn’t available. We got on very well. However ‘Urban Justice’ was an extremly difficult shoot. Seagal doesn’t like to be on set more than 3 hrs a day and on that particular picture he had to be there a lot. The script had 119 scenes and Steven was in 109. This wasn’t a buddy picture; he had to carry that film alone.


J: In your film ‘Mercenary for Justice’, there is an extended battle in the opening twenty minutes. It’s reminiscent of the style used in Black Hawk Down’. How were you able to create such an exciting sequence?
D: That opening sequence was a lot of fun. We shot that on location in South Africa. During Pre-production I sat down with the entire camera crew (four units), we watched ‘Black Hawk Down’ and the beach landing in ‘Saving Private Ryan’. As a group we combed over every frame of those sequences, I image we watched them almost 20 times. So ultimately I designed our opening in the same vein, by using a lot of hand-held cameras and 45 degree shutters. It was a decision I made early on, the idea was to open the film with a battle to grab people’s attention and bring them into the film. Unfortunately during that time Seagal and the producers were locked in a lawsuit, we had four different writers and nobody was talking to one another. Seagal did his version of the script and the producers did theirs. That’s why the story is pretty weak in that film. But man I had a good time shooting that opening, it was like playing ‘Army’ everyday.

Staff member
Very interesting NEW interview with Don E. Fauntleroy. He talks about ten minutes about working with Seagal.
Interesting stuff!! I never knew that Don E Fauntleroy directed a lot of Seagal's scenes in Submerged!!! Seagal fired Anthony Hickox and the cameraman. He didn't want to work with them anymore. So he called Don E. Fauntleroy to direct his scenes. So all the shots where it's only Seagal are directed by Don E. Fauntleroy. Hickox did the rest with the other castmemebers. Insane right???