KUCHING: Hollywood action movie star Steven Seagal will be meeting his fans in Kuching on April 27, as the special guest for the 4th Asean International Film Festival Awards (AIFFA) 2019.
Sarawak Tourism, Arts, Culture, Youth and Sports Minister Datuk Abdul Karim Rahman Hamzah said the American actor is well known for martial arts films that go back as far as in the 80s, such as Under Siege and Hard to Kill.
Steven Seagal will meet his fans at the Old Courthouse at 3pm, followed by a Gala Dinner Pullman Hotel at 7pm.
“His local fans will have the chance to meet him while we hope those (fans) in the neighbouring countries will also make a trip here as it is such a golden opportunity,” he said.
“In the past, we have Michelle Yeoh, Jackie Chan and Donnie Yen, making AIFFA one of the premier film festivals in the Asean region,” he added.
Speaking at a press conference held today, Karim said Sarawak is the perfect site to turn film scripts into a visual spectacle of an unforgettable landscapes, unique ethnicities and colourful customs and cultures.
Besides, the event also contributed in putting Sarawak on the global tourism map and continues to attract more visitors into the state as part of the strategies to boost tourism industry.
The three-day event, which begins on April 25, will feature a Starcraft Workshop on the first day for aspiring actors and filmmakers at Restoran Budaya, from 9am to 5pm.
On the second day, there will be digital film talks conducted by speakers from Netflix, Astro and Beach House Production.
On April 27, a pitching session will be held at Old Courthouse, starting at 10am where filmmakers may pitch their ideas to financiers to secure funding for production.
Karim said AIFFA is a biennial competition for filmmakers from 10 Asean countries, offering awards in 17 categories covering all major aspects of the creative and technical areas of filmmaking. 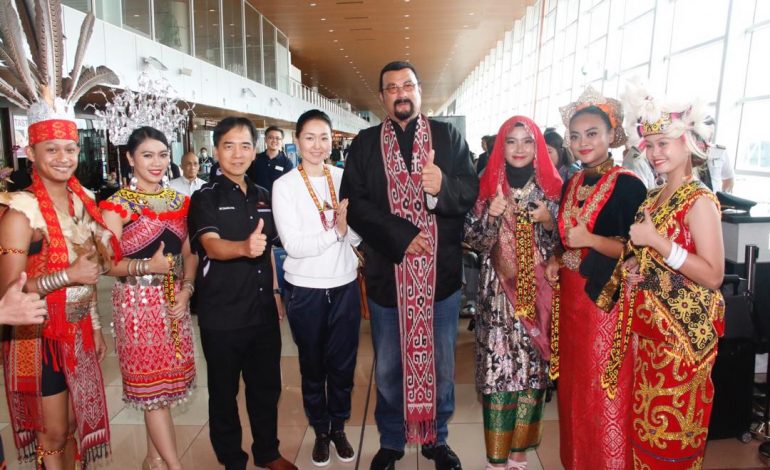 Do fans actually get to meet him, as in all the bits of video or photos I've seen of this or other things he just seems to be ushered around by a dozen or so people and answers a few of the same-old same-old questions to an interviewer.

Staff member
Press conference! Good to see him happy and enjoying himself

Staff member
Did I hear Seagal say that Attrition isn't out yet? That's good news, because it means we hopefully will get a proper release soon!

And he said something about Under Siege 3, normally he says when he had the money it comes. But now he was more positive, as if they are more active on part 3!

He did mention US3 but I don't see how it really fit in with the other two after so long? It won't happen, let's face it, but if it did... ?

Well that is true, it won’t fit. But the answer now and couple of months ago is different. Or he is just saying this to keep the people stick to him haha.

US3 will never happen (sadly)

SteDu said:
Well that is true, it won’t fit. But the answer now and couple of months ago is different. Or he is just saying this to keep the people stick to him haha.
Click to expand...

I think the answer is not so different. He just needs financing....he also said that in the 365 flix interviews...