Overview Reviews (1)
Plot:
Matt is an elite ex-cop whose life has gone down hill since he was kicked off the Force. After a rough encounter with a mysterious henchman, Matt is brought face to face with his only chance at reclaiming his life and clearing his gambling debt markers. Only after he gets started on his new tasks does he recognize good guy from bad. Meanwhile Matt's love for his only daughter helps him battle one of his greatest enemies, alcoholism. 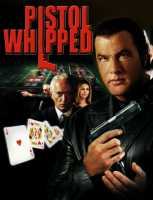 This is certainly an improvement over other direct to DVD titles such as The Foreigner, Out For A Kill, Out Of Reach, etc.

Plot:
Pretty straight forward and easy to follow. Quite like how Steven Seagal plays a different character for a change. Here he is a disgraced cop, rather than the elite CIA operative that he has playing in his previous movies. I agree with Hofmae though, found it pretty boring and overall too long.

Supporting Cast:
Pretty much same standard as Urban Justice. At least Lance Henriksen is in the movie more than Danny Trejo was in Urban Justice. Reasonable job, most were pretty decent.

Action:
Again car chases were boring. Shootouts were boring, pistols with unlimited ammunition. They must have a cart with all their bullets because so many are fired. Some nice squibs though. We see the same car chases and shootouts so many times in these low budget movies. Most are not very inventive.

The fight sequences were excellent. The good work from Urban Justice continues here. Really enjoyed the fights especially the ones against the Asians at the bowling lane. Again Steven Seagal shows he can create excellent fight scenes and there really was no excuse for the dreadful Out For A Kill, Out Of Reach dross with the stunt double doing most of the fights.

Stunt/Body Doubles:
Did not notice stunt double at all. Body double was there, but not too noticeable. Mainly shot at a distance.

Dubbing:
None. Hopefully earlier lessons have been learned.

Overall:
Best direct to DVD title? I don't think so.

The movie seemed overly long. I personally found it to be about half an hour too long. It felt like a two hour movie.