Overview Reviews (1)
Plot:
An intelligence operative discovers that no one is what they seem in the shadowy world of espionage. 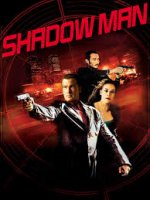 Well i too have seen Shadow Man. I was again not expecting too much, but was pleasantly surprised.

The plot was quite basic, easy to follow, but quite exciting. Basically a lot of different bad guys were after a super 'virus' and they thought Steven Seagal's character was carrying it.

The action was pretty good, although once again there was some cheap helicopter exploding special effects, they were better than the ones from Black Dawn though. The fights sequences were also pretty good, similar in quality to the ones from Mercenary, but i noticed a few instances where the stunt double was present, but it would not be too noticeable if you were not looking for it.

The one thing i thought was quite funny. At the beginning Steven Seagal is giving a demonstation, one of the students asks how it is done, so Steven Seagal pushes him about 10ft into a wall which i guess kills him. I found it pretty strange. :D

Also in most of Steven Seagal's recent movies he basically plays the same character. This movie could have been another Foreigner. Maybe it's time for some fresh ideas?

Overall i thought the movie was enjoyable, hopefully the next few movies are of similar or if possible better quality.
Upvote 0 Downvote
Read more…
Top