Overview Reviews (1)
Plot:
Chris Kody, the world's best mercenary, is freed from prison -- but there's a catch. Kody must use his lethal weapons and fighting skills to stop a group of terrorists who have taken over a nuclear sub. 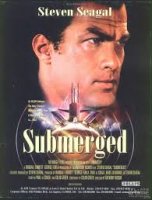 Movie: The plot in the movie is pretty straight forward, not complicated like 'The Foreigner'. The movie has lots of action, unfortunately there are only a few martial arts sequences with Steven Seagal. One with Gary Daniels and the other with a character that appeared out of a lift. It was the first time he was seen. All the action in the movie is pretty well done. :) For your information, i watched the first 10 minutes of a preview copy and after seeing it i thought the CGI was going to be aweful. Especially after seeing the drone aircraft - which in my opinion would not go amiss in Thunderbirds. Luckily after watching the movie, this seemed to be the worst bit of CGI in the whole movie. Overall the rest of the explosions, stunt sequences, etc are well done. There are many of them too.

The stunt double was a bit harder to see in this movie compared with the others, but i have managed to spot him in a few places. Even in some scenes where there are not stunts, like walking up a hill. :D

The supporting cast are pretty decent too. I thought Vinnie Jones was good in his role. I would like to see some more movies with him and Steven Seagal.

There's even some humour in the movie, and also homage to 'On Deadly Ground' when Vinnie Jones' character gives Steven Seagal a satellite phone and tells him 'incase you need to reach out and reach somebody'.

Sound: A nice rocking soundtrack is present. Unfortunately once again a lot of Steven Seagal's lines are dubbed. This in my opinion reduces the quality of the movie considerably. :( The dubbing is quite strange, the person doesn't even sound like Steven Seagal.

Picture quality: As you will see from the captures i have added in this post and the gallery the quality of picture is excellent. Certainly one of Steven Seagal's clearest pictures.

Overall: Apart from the dreadful dubbing, the movie is pretty decent. It is still no-where near as good as Steven Seagal's earliest movies, but it is still better than the likes of 'The Foreigner' and 'Out For A Kill'. For half the budget of 'Into The Sun' a reasonable movie has been made.