Overview Reviews (1)
Plot:
A freelance agent must transport a package for a mysterious employer, leading him into a web of betrayal and deceit. 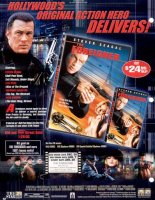 Well here is my mini review.

Overall fans seemed to be worried this was going to be poor. I have to say it's not as good as some of Seagal's earlier films such as Marked For Death, Hard To Kill, etc, but it certainly beats The Patriot and Ticker! I don't think it's on a par with Fire Down Below and The Glimmer Man which i rate much the same.

The film is certainly enjoyable, although for once the plot was a little complicated. Usually in most Seagal films the plot is simple. This one actually made you use your brain a little. There are quite a few twists in the plot.

The supporting actors/actresses were not up to the previous standards in my opinion. They do the job, but are not spectacular. Performances are reasonable from all. The main supporting actor (Max Ryan i think) is an advert for smoking! You'll see what i mean when you watch the movie for yourself.

So does Seagal still kick ass? The quick answer is yes, but you have to wait for a quite a little while in this movie before he does so. The moves he performs are good, but unfortunately the director seemed to like slow-motion shots! Nearly every action sequence was slowed down. This has been done before many time much better. This is supposedly the same director that will direct Seagal's next movie too!