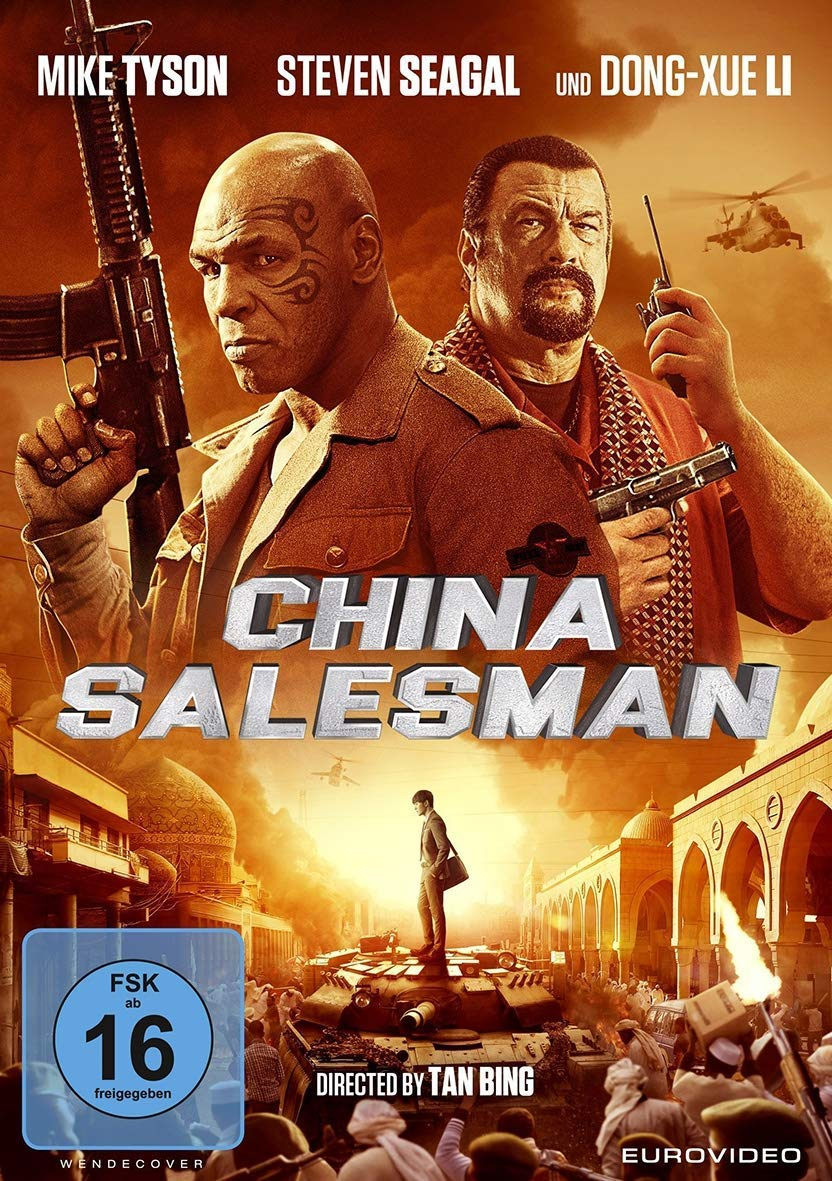 After waiting an eternity for *this* (or any other Seagal movie of late) China Salesman finally limps to UK DVD (under the misleading title of 'Tribal Warfare' and even more misleading lurid artwork, promising the viewer of a battle royale between Seagal and Mike Tyson) To be fair, practically anyone remotely bothered about such a battle has witnessed said fight on youtube, etc. But unless you've seen the movie in it's entirety.....you'd be baffled to learn that this fight happens around 10 minutes into the movie....and is quickly forgotten (and ignored) throughout the rest of the movie. You'd think they'd save the fight for the finale (but at around the 20 minute mark, you soon realise that 'coherency' is the not the strong point on display here)

The Plot (in a nutshell)
Groups of telecommunication firms engage in a high stakes bidding war to provide mobile phone access across war torn North-Africa.

Review (**Spoilers**)
If the plot synopsis doesn't sound interesting....it's because it isn't. I'm sure there's many great real-life advantages to providing poor countries cheap, reliable mobile phone and wifi (and this movie is based on true events) but none of it makes for particulary exciting viewing. The movie shows a lot of civil unrest (gun battles, army intervention) in the background....but probably only to give the project 'Trailer-Moments' and to appease financial backers.
Steven Seagal plays some kind of government spook (for a change) named 'Lauder' (pronounced 'louder', which given his constant whispering, was some kind of in-joke?) who is there to oversee the bidding war, whilst moonlighting under his cover of 'Bar Owner' (more 'Humphrey Go-Kart' than 'Bogart', sadly) Despite getting his ass handed to him by Mike Tyson early on, Lauder continues to pop up throughout the movie (usually sat down, talking on a phone.....ironically, given that the region is in dire need of a 'mobile network'?) or ocasionally doubled (quite ludicrously, whilst donning a motorcycle helmet, zapping around town) one scene at the begining shows a much slimmer guy on said motorbike, and the film-makers have crudely inserted an image of Seagals face across the visor (oh dear!) see picture below

It's more than obvious that Seagal getting defeated by Tyson was done without his consent, the editing (which has no Seagal and Tyson together in the same shot) is proof of such (plus Seagal spends the remainder of the movie, oblivious to what has happened before and unscathed by such a defeat) And given that's Seagals entire running time is a (generous) 10 minutes of footage.....the other 90 minutes are taken up with some of the worst actors ever (and saddled with even less emotitive dubbing, giving everyone Stephen Hawking-style accents to match their demeanours) The China Salesman (of the title) does little more but try to impress his competitors by running phone frequency tests on his laptop....or just endlessly run away from stereotypical African bad-guys chasing after him. Mike Tyson (despite portraying the leader of some brutal militia) seems to be acting as a one-man army.......in that one minute he's leading his troops, next minute he's spying first hand or later driving a tank (doesn't he have minions for the more menial tasks?) but come the end of the movie, he is captured, imprisoned, escapes and then converts into a speech-giving pacifist (replete with martyrdom) and all in the space of the final 15 minutes....phew!

Technically, the movie looks OK (apart from the dubbing of around 98% of the cast, and the occasional ropey green-screen backdrops) the battle scenes look great, but have no real relevence to the plot (making them redundant) My only guess is that a lot of this movie has gotten lost in translation (as with most Foreign movies of this ilk) because it seems as if it's 3 different movies stuck together. The meat of the film is some kind of 'Hallmark' TV movie about one man trying to bring 3G connectivity to North Africa.....Then it seems as if the makers have decided to add some war scenes to liven it up a little......and then after a second inspection, they've decided to shoe-horn Seagal and Tyson into proceedings, to try market it as an action movie. That would be OK, if the movie made any sense, or had one ounce of genuine urgency to it's plot.

The bottom line is....it's based on an already uninteresting premise..... and directed with a lack of interest (and featuring likewise performances)
In short:
A mess....slightly higher end for Seagal.....but a mess nonetheless.
Click to expand...

Man, that image of Seagal on the bike made me laugh, that is SHOCKING! haha!

Yesss, WHY did they do that?? That was soo bad, it looked soo fake, why.. just why??

Staff member
Looks like he has a space suit on.

Administrator said:
Looks like he has a space suit on.

Good be great for the sequel! China Spaceman!
F

The fight scene between Seagal and Tyson was awesome.