Here's the interesting part. Lerner says that The Expendables 4 will begin shooting next year, or at least 'maybe'. "Next year we're maybe filming The Expendables 4. "The action will be set in Cuba, but only if Fidel Castro is still alive, otherwise the story will change." So it looks like The Expendables, or at least somebody, are going after Castro. Now that's old school. Incidentally, today The Expendables 4 first appeared on the IMDb, the first person on the cast list (rumored) is Randy Couture.


Pierce Brosnan To Star In The Expendables 4.
source: http://www.manlymovie.net/2014/03/pierce-brosnan-to-star-in-expendables-4.html

Yes, let's get the obvious out of the way first. The Expendables 3 hasn't even been released yet. That said, here's some news on The Expendables 4. The first person to say yes to signing on is Pierce Brosnan, who had a bit of a run as an action man himself in the past.

Speaking to Shortlist Magazine, Brosnan says: "The offer has come in for the next Expendables. I just worked with Avi Lerner over in Bulgaria who makes them. He said, "Would you like to be in The Expendables? I'd love to have you". And I said "why not", so we'll see".

The Expendables 4 has already been confirmed by Avi Lerner. As usual, we were the first western site to get that news out when we revealed that the plan for The Expendables 4, as of the time of that report, was to fast-track it right after The Expendables 3 and have the team go after Fidel Castro in Cuba. Somewhat roughly Lerner declared that that premise would depend on whether or not Castro would still be alive in late 2014.

They will not start filming this year thats for sure. They have not had time to go location scouting any where yet and they dont have a cast. So no filming for the expendables 4 this year.

Thanks, Mason! Who knows who will be in it for sure or when they will start filming, but I am glad to hear there will probably be a #4!

And definitely looking forward to #3!!!

JoshStern said:
They will not start filming this year thats for sure. They have not had time to go location scouting any where yet and they dont have a cast. So no filming for the expendables 4 this year.
Click to expand...

RetroSeagal said:
Thanks, Mason! Who knows who will be in it for sure or when they will start filming, but I am glad to hear there will probably be a #4!

I would love to see these new addtions to EX4.

John Travolta, aged 60, is a bona fide movie star. But to achieve legendary status, especially as an action star, you need a role in Sylvester Stallone’s Expendables.
The latest rumour that has reached our ears is that John Travolta is being considered for the next Expendables movie, not as a hero who will join ranks of Arnold Schwarzenegger, Harrison Ford, Jason Statham and the rest, but join the leagues of villains that take on the Expendables, like Mel Gibson, Jean-Claude Van Damme and Eric Roberts. John Travolta is no stranger to playing a villain and this is not the first time he has been linked with the Expendables, but if the latest rumour is anything to go by – he will be playing the villain of Sylvester Stallone’s Expendables 4.
John Travolta is not quite the prolific actor he used to be. The actor is currently starring in approximately two movies a year, with the odd ‘special thanks’ and voice role thrown in. His schedule seems relatively clear in 2015 and he currently has no projects officially announced for 2016, which adds weight to the rumour that John Travolta could play the villain in Expendables 4.
The source of the rumour remains unidentified, but the information provided is clear. John Travolta is “being considered” for the main antagonist in Expendables 4. According to IMDb pro, Expendables 4 has been in development since October 25th 2013 and with Expendables 3 set for release in early August it seems about the right time to start some serious plans for the next movie, especially with the increased interest in the franchise since Patrick Hughes’ movie started doing press.
S

Travolta would be a good villain in this. I'd also love to see Nic Cage playing some crazy character, just because crazy Nic Cage is a joy to behold.

As for the whole Seagal film. Unfortunately it always seemed unlikely. There's the whole Avi Lerner/Millennium issue.
Furthermore though, Seagal has made a lot of enemies in the MMA community, and you've now got Randy Couture, Rhonda Rousey and Victor Ortiz as part of the franchise now. In the second film they of course had Van Damme too. Seagal unfortunately has just too many enemies in these circles.

Anyway, it'd also be great to see people like Gary Busey, Michael Biehn, Rutger Hauer and guys like that make appearences in the next one. We had Eric Roberts in no 1, Robert Davi is in No 3.
I think in terms of Schwarzenegger, Jet Li and then the one film cameo wonders like Norris, Ford, Rourke etc, they've done their time. They don't need to return really. 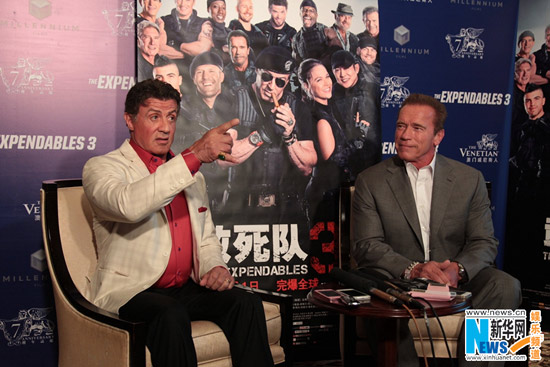 "As we go on, we will continue to add more stars, more personalities, more athletes, more individuals around the world, not just Americans. They'll be from all parts of the world. Hopefully, we'll be able to film in Asia very soon," said Stallone.
Stallone, who directed and wrote the first Expendables film, said he considered getting Hong Kong director John Woo to helm the fourth movie. He is keen to get Jackie Chan, Asia's most wanted action star, involved.

"We've always wanted to use Jackie Chan. The only reason we didn't…because there really wasn't a part big enough for him, because we had so many actors. But in the next one, we are going to reduce the actors, and let's just say, expand the screen time of each star," Stallone said.
Schwarzenegger said that one's nationality should not matter when hiring directors or actors.
"I go by talent. I think Asia has some really talented directors, the Austrians have some talented directors, the Americans have them, the French have them. So I think you just have to find the appropriate director, not to do it for political reasons, or not because it can raise more money if you hire an revered Asian director or an Austrian director. I think if you just get the right person," he said.

I want to see these people in The Expndables 4:

And for god sake kill off Couture Crews Powell and Lutz. Ronda and Ortiz can stay they atleast know how to fight.

Staff member
John Woo is my favorite director, that would be awesome. If the film gets green light, I hope Seagal will be in this time. It's sad we can't do anything to tell him we really would like to see him there. I wish Keoni Waxman would talk with him about that.

Martin01 said:
John Woo is my favorite director, that would be awesome. If the film gets green light, I hope Seagal will be in this time. It's sad we can't do anything to tell him we really would like to see him there. I wish Keoni Waxman would talk with him about that.
Click to expand...


I asked Keoni Waxman about him talking to Seagal about EX4 twice, but he didn't reply to that. I guess it's not his business....

DiDa said:
I asked Keoni Waxman about him talking to Seagal about EX4 twice, but he didn't reply to that. I guess it's not his business....
Click to expand...

Well, it’s just a guess, but if Seagal is in an EX movie, people probably would have a bigger interest in his movies too.

Yeah exactly. But sadly it never seems to happen ..

Sly says if he does another Expendables it is going to be Hardcore R. Only time will tell..
http://www.tubechop.com/watch/3634680

The Expendables 4 is on Its Way!
http://www.comingsoon.net/movies/news/621151-the-expendables-4-is-on-its-way

The Expendables 4 is on its way!
The words of Chumbawamba could easily apply to the career of Sylvester Stallone: “I get knocked down, but I get up again, you’re never going to keep me down.” That’s our roundabout way of letting you know that Variety is reporting that Nu Image and Millennium have just made pre-sales deals with SP International Pictures on behalf of SSXH Beijing and Max Screen Film Distribution to bring us The Expendables 4.
This news comes despite The Expendables 3 only grossing $39 million domestically, which would have made it an out-and-out flop if not for the robust $167 million it took in overseas. Expendables 4 is expected to shoot in 2016 (partly in China) for a 2017 release, although the director and cast have yet been announced, though the trade assures that the all-star action formula will be followed to the letter with a budget north of $100 million. The Expendables franchise features Stallone as mercenary team leader Barney Ross, with kick-ass heavyweights like Jason Statham, Jet Li, Dolph Lundgren, Terry Crews, Randy Couture and Arnold Schwarzenegger making up the core group.
Stallone, who spoke to CraveOnline for the Blu-ray release of The Expendables 3, stated that he blamed the box office disappointment of the threequel on its attempt to reach a wider audience with a PG-13 rating, a mistake he said “won’t happen again.” He also teased that it was probable that a prominent member of the team would kick the bucket in a fourth film.
“It’s is a big conflict for me,” said Stallone. “because in an R-rated film it is difficult to believe that none of the heroes die. I personally just believe that the characters become identifiable and their demise could put a dark cloud over an audience exiting the theatre after seeing the film. But that may change in ‘Expendables 4’…”
Shortly before the failure of The Expendables 3, Millennium also trumpeted plans for an all-female spin-off film titled The ExpendaBelles with Killers and 21 director Robert Luketic brought aboard to helm. Although they were initially targeting big names like Cameron Diaz, Milla Jovovich, Sigourney Weaver and even Meryl Streep(!), there has been no recent movement on the project.

Staff member
Yep! It's go. I hope Sly is trying to get Seagal again. Seagal and Chan are the only ones missing from this franchise.

By the way, 2 cast members already confirmed that they are in part 4:

Terry Crews: So good seeing my Expendables 1,2,3 and 4 homie @Randy_Couture at @Unbreakable fitness this morning! A TRUE WARRIOR