Overview Reviews (1)
Plot:
Roland Sallinger is an LA cop who after nearly being killed by his greedy partner, and eventually being forced to retire for medical reasons, flees to San Antonio, Texas, after being asked to work as a bodyguard for the daughter of a wealthy businessman. The businessman had been a colleague of Sallinger years before, when they were both cops. When mobsters kidnap the businessman's daughter, he hunts them down to rescue her and protect her. 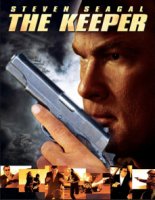 I too have just finished watching The Keeper. Very unusual for me to watch a movie during the daytime, but i was looking forward to this film as the trailer was very promising.

First of all, the DVD box. As many have stated already they have not even got key plot details correct on the back. Very poor. The cover picture though is very well done, certainly better than the photoshopped head from other DTV efforts. The movie only cost £7.99 so decent value too. :)

Plot:
Simple, easy to follow and flows well. Probably the best plot for any of the DTV releases.

Action:
Car chase was much better than we have previously seen on the DTV releases. The fight sequences were generally short, but there were a few nice brutal ones similar to those in Urban Justice. Nice crunching noises too. A couple we got the swinging arms, legs, sequence! The shootouts were excellent too. Sound effects from the guns was spot on.

Stunt Double:
Not really visible if at all. There were a couple of scenes where we saw Steven Seagal's character from the rear that may have been the double, but very hard to tell.

Dubbing:
A little at the start for some reason, but after the first minute or so it was all Steven Seagal.

Cast:
Casting was great. Not any star names, but overall a very good job from all.

Overall:
This is amoungst the best DTV Steven Seagal releases and i thoroughly recommend it. It is on a par with Urban Justice and probably even Fire Down Below. It is well shot and directed. I am now looking forward to Dangerous Man, Lawman and Machete and his other future projects. Steven Seagal's career is hopefully on the way back up. 8/10
Upvote 0 Downvote
Read more…
Top