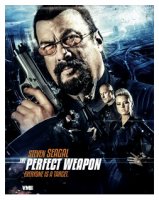 In a not too distant future, a totalitarian state secret government organization run by The Director (Steven Seagal) controls all aspects of life. All “enemies of the state” are dealt with in the harshest way and most of them are executed by a secret organization’s operatives and assassins. The best operative is code-named Condor (Johnny Messner) – an elite agent and hit man for the government. However, in his latest assignment he fails to kill an opposition leader and finds himself on the run from the very same government agency that he works for. This sets in motion a chain of events with unforeseen consequences for all involved. CONDOR just might survive the hunt by the all powerful government organization and the betrayals by so-called allies as he is THE PERFECT WEAPON.

Ahead of Cannes, VMI Worldwide has set Steven Seagal to front “Perfect Weapon”.
Not to be confused with the ’90s classic starring Jeff Speakman, the hitman thriller sounds like a cross between Sly Stallone vehicle “Assassins” and recent Sean Penn vehicle “The Gunman”.

In the not too distant future, an elite assassin fails to terminate his target and finds himself on the run from the totalitarian state’s secret government organization that employs him.

Seagal is next in “Absolution” (the trailer of which we posted yesterday), co-starring Vinnie Jones, and recently started filming Michael Winnick’s “Code of Honor”.
Click to expand...

https://www.thefilmcatalogue.com/catalog/FilmDetail.php?id=20062
Last edited by a moderator: Jan 17, 2018
Click to expand...

Oh my God! That poster! Might be the worst I've seen. I understand it's a mock-up made from stock photos, but come on.

Plot sounds like it could be a decent movie in the right hands. But truth be told Seagal seems to have even less drive and energy these days, so I fully expect to see him tired and uninterested yet again. Another day, another paycheck.

The same goes for Bruce Willis who seems to have fully embraced his new life as a DTV star. He's signed up for a bunch of new DTV movies again, all of them produced by Emmett/Furla.

Staff member
It does indeed look low budget, but Premiere was able to produce COH with 8 millions, maybe this company is able to do the same.

The plot seems to be at least decent. I hope there will be more informations during/after Cannes Festival.
J

I don't know what the real budgets are, but $8M sounds waaaayyy too high for Code of Honor. I think Dolph's Skin Trade was made for around that and it had a big ensemble cast and big action set pieces and a long shooting schedule and certainly a much higher budget than most DTV movies usually have. Or a movie called Big Game starring Samuel L. Jackson, Jim Broadbent, Ray Stevenson, Felicity Huffman etc. that was made for $10M and was shot on location in the mountains and had some big action scenes.

A DTV quickie shot in 3 weeks or less and with action that consists mostly of hand to hand fight scenes and gun play and shot indoors can not cost that much.

But I'll take passion and drive and good filmmaking over big budgets any day. I have no problem with low budget movies, it's when there's no desire to make a good movie that irks me, just doing the bare minimum, just making a product for the market, put Seagal on the cover holding a gun and call it a day, doesn't matter if the movie is good or not, that I hate. But sadly that's the case with 99% of all DTV movies.

Staff member
At least COH was filmed in the USA, it's probably a bit more expensive to film there.

Overall I agree with you, but I still hope the movie gets a solid budget, I don't want to see cheap CGI-scenes like in a "Mega Shark" movie (or the helicopter explosion in "Shadow Man"

). Such scenes really are able to ruin a movie.
R

Its a real shame if he has left Waxman and Co because they were making good solid STV action films with Seagal and i hope we are not returning to the dark days of Shadow Man,Attack Force etc

rastafari said:
and i hope we are not returning to the dark days of Shadow Man,Attack Force etc
Click to expand...

I don't get an "Attack Force" vibe from COH, at least at the moment, but after looking at the poster I'm not so sure about this one.

I hope there won't be added terrible CGI-scenes, such as spaceships or other SciFi-additions, that only look good in blockbuster movies.

Btw, my wild guess about the director is John Lyde, director of the companys latest Lundgren movie "Riot".
J

rastafari said:
As with any film it all comes down to the Director/Producer

Its a real shame if he has left Waxman and Co because they were making good solid STV action films with Seagal and i hope we are not returning to the dark days of Shadow Man,Attack Force etc
Click to expand...

VMI is the sales agent on War Pigs and Perfect Weapon, I don't know if they were actually involved in the production of either one.

War Pigs has a good cast, but it's very low budget, filmed in 3 weeks and with limited resources based on behind the scenes pictures. They went to Kickstarter or Indiegogo to raise a couple thousand. I think it's safe to say the real budget wasn't anywhere near $10M.

Most of the movies VMI sells are very low budget.

Staff member
Maybe a movie even worse than Attack Force? I always thought this is not possible.

Martin01 said:
Maybe a movie even worse than Attack Force? I always thought this is not possible.


Maybe we will be surprised....

This doesn't sound sci-fi to me. If it happens in the "near future" it might be more of a dystopian story, which I guess falls under sci-fi but it doesn't strike me as a futuristic tale per se, more of a sniper thriller happening in that world.

That being said sci-fi doesn't necessarily equal special effects or doesn't always need a big budget, sci-fi to me is all about the ideas. Some of the best sci-fi movies in recent years have been low budget like Coherence and Predestination.

But that being said this just seems like another cheap actioner.
C

rastafari said:
The last film this company made was War Pigs(Dolph/Micky Rourke film) which has a 10M budget so if its that then this might be okay
Click to expand...

They also made BLOOD OF REDEMPTION which is a really low budget ($2M or less and their upcoming RIOT doesn't seem to be higher despite a better teaser trailer), but where did you hear WAR PIGS was $10 million?

I haven't heard or seen anything about its budget and doubt it was anything near that figure. They shot it in 18 days (plus pick-up shots but that ain't much) which is saying a lot. I'd be surprised if it's even close to $5 million given the rate of DTVs these days, even with Rourke (who barely shot 1 or two days), Lundgren and Chuck Liddell in the cast... (and most of the props, costumes and vehicles were lend by WWII reenactors)

Staff member
I think John Lyde could be an interesting director choice, since the trailer for his latest movie "Riot" (from the same producers) got some pretty positive feedback (and they just wrapped filming last month).

But it's just a wild guess anyway and we have to wait and see who will be attached as director. 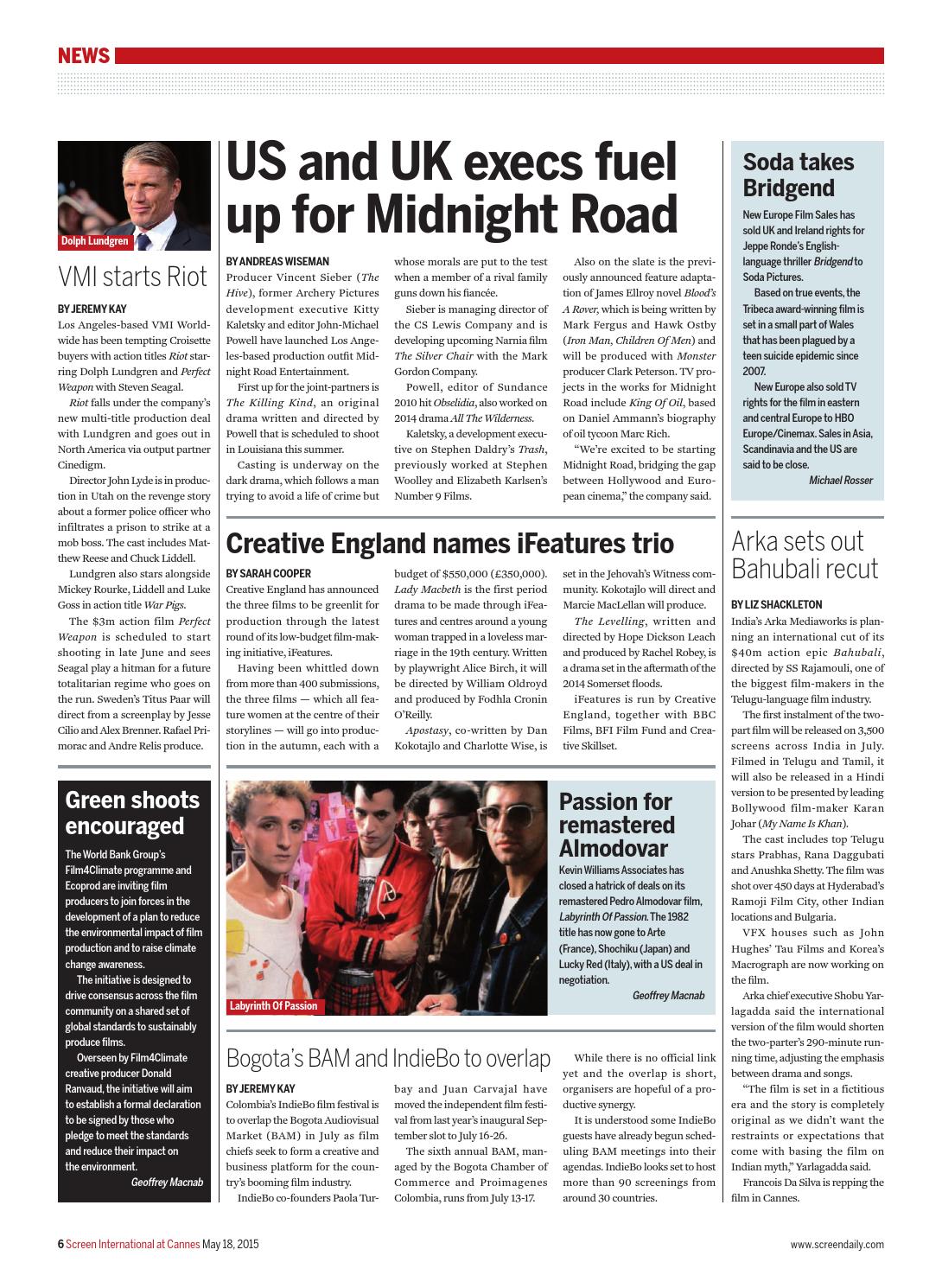 Staff member
I don’t know what to expect from this.