#81
I agree, "Pistol whipped" deserves 3 out of 5 stars.
Steven, you really should go on a diet.
HE looks so heavy and rather swollen, love him nevertheless.
at least in this movie he is trying to act.
the love interest, the girl is far too young for him.
Halkush

#82
I wasnt going to say anything but buggar it you know whats best dont worry steven iam not going to start on your back about your weight again not that i have ever bitched about it...we can be concerned about you with out every five minutes ohh he is balloning out or his getting to slow..i really enjoyed this one the past couple of your movies are only getting better an couple of the comments you made 'like itchy balls' had my rolling on the floor in laughter ...you still got it mate ...and the young lady in this movie as your love interest she is beautiful like it when you asked if steve wanted to be buried or cremated?..and he said buried hell i would have burnt him to an crisp too just to make sure the prick wouldnt come back..great storyline great co stars good to see Lance back ..i think that it was almost left open on purpose for an sequel?..thanks for an great movie iam looking forward to what you are going to dish up for us in the future
4/5..
H

#83
I liked Pistol whipped, the story was much slower, more realistic, I think Steven did his own stunts for a change and his voice didn't seem to me as though it was dubbed. I liked this director and Steven acted his age for a change. Nice bit about having a daughter in the movie that he cared for, but I did not like his love interest, she was too fake and not age appropriate, a bit of cradle snatching if you ask me.but that's just my opinion.
Halkush

#84
All that matters really is that he always gets his man..wether then friend or foe..if thatw as an friend he knocked off i would hate to be his enemy...could say that guy at the end got whipped and creamed ..(words of another member here)..ohh and by the way his ponytail was back that made my day should see more of that in more of his movies..

#86
In a subtle way Pistol Whipped may be one of Seagal's best films.

It reminds me very much of Steve McQueens last film the Hunter. Seagal, like McQueen plays a man who is world weary and whose best years are behind him.

In this film we don't have the moralistic Seagal, but the tired Seagal whose character is more intent on survival than revenge. He is a flawed person, as we are all flawed, and the lines between good and bad, right and wrong have become blurred.

In Pistol Whipped Seagal presents a more three dimensional character than he has in many of his recent outings. Had he been Clint Eastwood he'd have received rave reviews for the performance.

Unfortunately because this is DTV it will be little noticed and probably readily forgotten by many including the great man himself.

I finally got to buy it and wow... I'm impressed.

By far my favorite Seagal film since Exit Wounds. I loved the score, the editing, the filming style, and the supporting cast. Not to mention Seagal kicking ass as usual, but he's doing it in a much more polished fashion this time around (compared to some of his other recent efforts). This one deffinetly seemed to have a quality much closer to theatrical standards than any of his other DTV films. The effects were great, the filming and editing was styling and modern, and the acting was top notch especially from Lance and "Blue"(forget the actor's name). I also loved seeing Seagal play the Dirt-Bag with a heart of gold character, especially how the movie ends with him being a better father, a better person and having his life in order but still being the same bad-ass willing to kill for cash.

If you haven't seen it, do so NOW! Buy it, don't rent or watch it on TV. It's worth the money and well worth adding to your collection. You won't be disapointed.

I can only hope his future films are this GREAT.

Of course this is all just MY opinion though...

#88
By far my favorite Seagal film since Exit Wounds. I loved the score, the editing, the filming style, and the supporting cast. Not to mention Seagal kicking ass as usual, but he's doing it in a much more polished fashion this time around (compared to some of his other recent efforts). This one deffinetly seemed to have a quality much closer to theatrical standards than any of his other DTV films. The effects were great, the filming and editing was styling and modern, and the acting was top notch especially from Lance and "Blue"(forget the actor's name). I also loved seeing Seagal play the Dirt-Bag with a heart of gold character, especially how the movie ends with him being a better father, a better person and having his life in order but still being the same bad-ass willing to kill for cash.
Click to expand...
signed. but the visible double is annoying one more time. not the overshoulders, but when he is walking and the camera is so close to him, that its clear to see its not steven, also the scene on the roof.. and the shootout on the street...

#89
I just bought "Pistol Whipped" from Wal Mart and just finished watching it. And let me tell you, I just went through a Steven Seagal phase and bought 15 of his DVDs in the last month at various stores. I've always liked his movies and have owned a handful of his DVDs since I was in High School, but I finally am 3 movies short of having his whole collection! Anyways, my hopes were amazingly high at first, having "The Glimmer Man" and it's awesome fights set the bar for me, then progressively working my way down. The last 3 Seagal DVDs I've seen were "Attack Force", "Flight of Fury", and "Shadow Man", and aside from "Shadow Man", I was honestly losing hope he'd make a decent entry again.
But "Pistol Whipped" has me back in the saddle. I liked this one a lot, and won't hesitate to say it's probably my favorite of his DTV films. It was good to see Seagal fast as he was in the 80s with his martial arts, and he seems to have slimmed down a bit, and the scene where he fights the Koreans restored my faith in Seagal. I loved seeing him just hammer the one racist Korean into the corner, and NOT use a DOUBLE! I was impressed.

I hope Seagal is realizing that the quality, not quanitity, rule keeps you in the game? Maybe it's out of his hands? But, I do hope he eases up a bit and takes his time and makes more quality flicks like "Pistol Whipped" instead of 3-5 films per year churned out under the gun.
I'm excited to get "Urban Justice" next.
D

#90
If you liked the way he kicked ass in Pistol Whipped, you`re gonna love Urban Justice!

Dragonking.
" I don`t think you have the balls!"
N

#91
Loved this movie!! Starts off slowly, gets very interesting, the action builds to its explosive climax and then it leaves room for a sequel...brilliant. One of my favourite Seagal movies. Can't praise it enough.
L

Great the Hammer fight, the way he break the bad teeth and...good enough the other ones.

The plot and the script...fine, with a couple of funny lines.

To finish: 3.5 of 5, at the same level of Urban/Renegade Justice and Pistol Whipped.

His best DTV movies, his 3 latest.Good, isn´t it?

#93
SUPERTOM - A brilliant and thorough review Well Done. I can see that you have put a lot of your time writing this - I appreciate and Thank You again. I thought this was a very humane story line for SS and he played the role very well. It is also my best film since US2. I rented this out, so I watched it twice in one night !!!!!!!!!!
(Apologies - I only joined in August '08, so I am months behind the review of this film - I am still looking through archieve and find it very interesting! )

#94
I LUVVVED it, I like my guys a little on the heavy side tho. I plan to watch it again on Tuesday cause movies are only 99c that day.
L

#95
Since Roel Reine is dutch like me, I can't help but feeling a little proud

Together with Don E. FauntLeRoy, mr. Reine is the best director Steven has had in years. The only thing I didn't like is the huge amount of slowmotion effects during the shootouts, but besides that I really liked the movie.

Not just because of the action, but because of the acting. I really liked the tragic father/daughter relationship, which was very well acted, not only by Seagal, but also by the little girl. Than there is the action: nothing we haven't seen before, but the fact that it is something we did see before makes it all the more worthwhile, like coming home from a long vacation.

What I also liked, is the fact that Steven Seagal's character was a little different than the most characters he plays. An alcohol addict, who isn't too good with children (although he tries) reminded me of the more recent Jean-Claude van Damme movie Until Death, which also was a great movie. Although not his best movie ever, it definitly is a good one. I would rate it a 7.5 out of 10.
S

#98
batman said:
I just noticed you can pick this up digitally in HD on amazon for $12.99......so of course I just spent $7 on a DVD copy with the slip cover. I think I'm going to go for the HD copy anyway.
Click to expand...
You are aware that this movie is available on Blu-ray?
Here's the Italian Blu-Ray 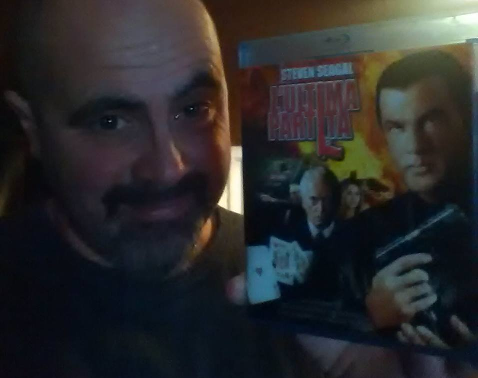 Click to expand...
It does seem to have shot up in price somewhat....although, there#s one on E-bay £15 delivered (if that's any help?)