#81
Out of Reach is one of his worst. It is so boring and cheap looking. He is also dubbed 75 percent of the movie.

#82
Kotegashi said:
That's an understatement. It was pretty horrific, the idea had potential but the excecution was abbismal.
Click to expand...
One source said that when Seagal came to set he said to director he wanted Attack Force to be like Predator 2. I guess that's why there's these weird Predator-like blades.

#83
Mazen said:
I'm not a fan of his newer movies. If I had to pick his worse movie that has to be Against the Dark.
Click to expand...
It's been 10 years since I saw it, but if I remember right Seagal's role was pretty small? That's why I don't think it is his worst because he's hardly in it.

#84
SenseiSeagal said:
It's been 10 years since I saw it, but if I remember right Seagal's role was pretty small? That's why I don't think it is his worst because he's hardly in it.
Click to expand...
I don't recall his role being small in Against the Dark. Only movie I can remember his role being small is Executive Decision. However, I could be wrong so don't quote me on that.

#85
Out of Reach is definately his worst, in the end you can see a man standing, with his face to you watching, he is walking of the stairs. Than he is attacked, and than it is Seagal.. You can SEE that it is not him, with his hole face. That's really bad..

#86
"Out of Reach", "Submerged", and "Attack Force" are probably the worst, with respect to significant lack of contribution from Seagal resulting in the painfully evident stunt, physical, and voice doubles. I emphasise a distinction between stunt and physical doubles because, as mentioned earlier in this thread, he's just not even there in presence at times, let alone doing his fights.

#87
Mazen said:
I don't recall his role being small in Against the Dark. Only movie I can remember his role being small is Executive Decision. However, I could be wrong so don't quote me on that.
Click to expand...
So I did some research and Seagal had screen time less than 15 minutes which is not much.

#88
I really can't remember a much from Out of Reach. Only the end fight scene with swords. Idk should I buy it again.. Probably not.

#89
I still have most of Seagal's movies in my DVD collection. I got most of the lower grade DTV movies on compilation box sets such as the below - perhaps something like this might be the answer if you're looking to complete your collection.

#90
After Fire Down Below Seagal movies started going down hill in my opinion.
D

#91
I used to believe FLIGHT OF FURY was his worst film, but then he went and made SNIPER: SPECIAL OPS. I know he's only a support player in it, but he was highlighted as the star and that was hard to get over. (It wasn't so bad when it was done with AGAINST THE DARK because he was at least active in the that film. Not just sitting in a room.) Thank heavens he redeemed himself with ATTRITION.

#92
I would say Flight of Fury is on the same level with Mercenary for Justice which I think is one of his better DTV's. There are much, much worse films like Attack Force, Shadow Man and Black Dawn.

#94
DiDa said:
To me it is Attack Force or Kill Switch ( I really hate the way they edited the movie)
Click to expand...
Yep, same here. Kill Switch could have been a good movie. But the abvious fight doubles and the editing ruined it for me.

#95
Kill Switch was a huge disappointment
especially because his two previois films (UJ and PW) had been so good.

Staff member
#96
Black Dawn is also very bad. Seagal left the set after 18 days, because of troubles with the director...they still had 12 days to go....

#97
There's so many of his DTV's where he left from the set before the shooting was complete. I wonder why they still paid him they should have replace him instead. Submerged for example would have been a very different movie without Seagal. Van Damme or Lundgren fighting aliens in sub.

Staff member
#98
Yes Kill Switch, that was the one with the end scene that could have been made for a different movie. Also remember the dodgy cover for it with a photo shopped Seagal.

#99
Administrator said:
Yes Kill Switch, that was the one with the end scene that could have been made for a different movie. Also remember the dodgy cover for it with a photo shopped Seagal. 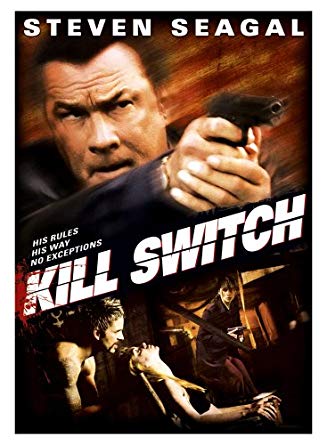